A Big Investment on Safety of Women: Learn Now 4 kinds of Martial Arts

Women’s safety is undeniably a concern globally. Women are prone to numerous forms of harassment in their day to day lives. Many become the victim of heinous crimes like sexual assaults in broad daylight. We’ve heard countless cases of these run on prime-time channels as breaking news & heartbreaking incidents.

Are we doing enough for women safety? What are we teaching women regarding self-defence? If we ask 2 out of 5 women, probably they’ll seem confused whether or not they require self-defence classes for their safety. 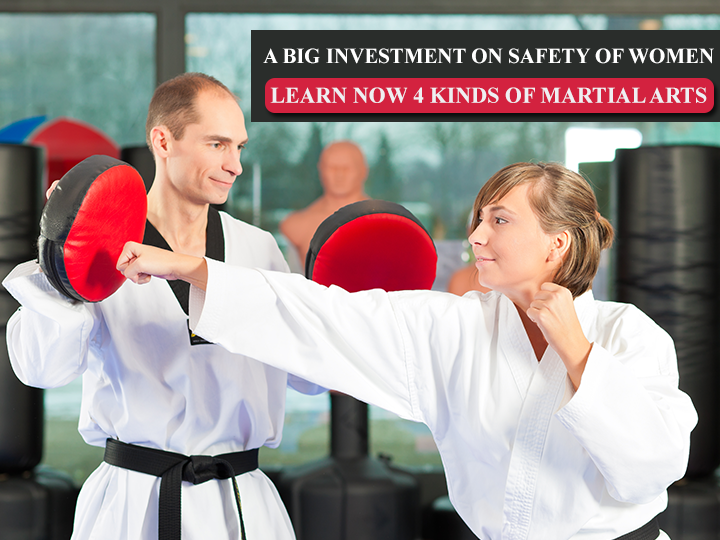 Is Self-Defence the need of the hour?

Yes, every individual should be capable enough to fight back for their safety. Women, in particular, should be taught ways to act in their self-defence. There are various schools which offer self-defence classes to women, children and adults. Here, we are going to focus on four martial art forms which every woman must learn.

Let us now look into these 4 Martial Art Forms!

This form of martial art focusses on aggression in the fight. The impact of aggressively attacking concludes the combat quickly so that there is minimal injury. If we speak in terms of its real-world usage, it is the most efficient form of martial art that women must learn. This art form teaches us to reach the most vulnerable parts of the human anatomy such as the eye and the throat. However, when combined with effective tactic and speed variables, this will give women the upper hand in self-defence.

Focussing on the art of kicking, this form of martial art is suitable for women. This form is originated in Korea and is popular among the masses worldwide. Women can make most from it if they learn the unique ways of blowing lethal kicks to ensure a definite win in the combat.

Facing a stronger opponent can take away all your confidence. However, with Aikido as one of the forms, it does not require you to be of the strongest as it redirects the strength of the opponent. Women can generally learn this form and need not be muscular as this art form encompasses techniques of joint locking and throwing techniques. It will surely benefit women to escape the deadly situation.

Before we look into the fourth form, “Have you ever considered investing in establishing a martial arts studio particularly for women? If yes and you’re confused where to begin, check out JIBASoft’s Martial Arts Studio Software, one of the essential investment for you to successfully operate your business. Get access to a variety of channels that minimizes the need of administration headcounts and maximizes efficiency, clear-clean data, billing management, member management and automation.

Now, let us finish up with the fourth one, Arnis,

Also known as Kali, this form of martial arts is weapon-based suitable for women and young children. However, Arnis could be trained without the use of weapons as well. Such a thing will ensure that the fighter can significantly take advantage of in case he/she is unarmed. Arnis does exceptionally well in the real-world scenarios & women can benefit from it. Nonetheless, once the skill is grasped, one can use anything such as the smallest of keys, umbrellas and pen to encounter grave situations.

The decision of your safety is in your mighty hands. The option of running a successful martial arts school venture is also in your hand. Our OnMat management software is just a click away for your business, check out the pricing here now.

Opening A Dojo: You Need To Invest In Martial Arts Studio Software